Hargun Singh Tikku > Uncategorized > Cubing and Me – End of 2017

At the starting of the year I got introduced to a new hobby I never knew even existed, Speedcubing, like I knew there were people who could solve the Rubik’s cube much faster than I could at that time, but I didn’t know there were competitions and a community for it.

I went to my first competition, Mathsoc Open 2017 before I knew brands other than Rubik’s even existed, and I made the classic newbie mistake, buying a Rubik’s Speedcube.

The normal Rubik’s Cube costs around ?400 whereas the speedcube costed ?1000 and included just an improved normal one with a set of screws, washers, a screwdriver and some lubricant to make the cube faster.

I thought it was godly until I tried some other cubes which were much better at half the price of mine.

My averages at the competition were around 50 seconds for 3×3 and 14 seconds for Skewb, remember these numbers for afterwards.

I didn’t really talk to anyone else there as I left after doing my solves on both days.

The 3×3 was one which was out of production, performed great and was very rare, or so it said, So I didn’t hesitate before spending ?700 on it, used it as my main for my next two competitions, and found out after my 3rd competition that it was another one advertised as the one I thought it was, that was sold for ?180 on Amazon itself too.

I felt cheated, that was the last time I ordered any puzzle from Amazon.

At my 2nd and 3rd competitions, my results were a lot better, with averages of 38 seconds and 25 seconds in 3×3 respectively.

My communication skills were a lot better in these and I made a lot of new friends at especially the 3rd one, which was held at Shiv Nadar University, Greater Noida.

Between SNU and NCRO, I bought a new 3×3 and magnetized it for improved performance, but I accidently left a piece on the table where some superglue had been spilled, a piece of plywood got attached to the piece and thus I couldn’t use it in competition.

Then came my 4th competition, NCRO 2017, in which I participated in a lot of events. Including 3×3 with Feet, which was definitely a questionable choice, but I wanted to try it out anyway, one thing I can almost be certain of is, that was my first and only solve I’ll ever attempt.

I got okayish results in everything and almost got to Skewb finals but missed it as in the second round, my first solve, which could have been a 4 second solve, turned out to be a 30 second solve as my skewb went flying in the air after slipping out from my hands and all the pieces flew everywhere, top 12 people in the second round went to finals, I was 13th and missed it by just 0.05 milliseconds.

My next competition was one where I talked to anyone that would talk to me, I also applied to be on staff.

A few days later, I got a message from a member of Capital Cubing, the organization which has been organizing basically every Delhi NCR competition since 2015.

I was excited and immediately filled out the form and was accepted.

It was a whole new group of friends, some of whom I hadn’t even met before.

I was really excited for my next competition, Speedcubing ESYA, but couldn’t go due to riots breaking out in parts of Delhi.

My next competition wasn’t really that special.

Then came my latest competition, Shri Ram Cubing Challenge 2017, it was held in SRCC in Delhi University.

It had all 18 events in 2 days, which was something that hadn’t ever been accomplished before.

I was excited mostly for Skewb, I had been getting times that would have been enough for me to win Skewb, but I plus 2’d out of 2nd place and instead got 6th place, for a +2 in Skewb, it needs to be atleast 60° off and mine was approximately 62° off.

I performed well in other events, even better in some events than what I usually averaged at home.

That was my last big competition of the year, there was another competition, FMC Asia 2017, which was held at multiple locations in Asia with only one event, Fewest Moves Challenge. In it, you get to do 3 solves, of an hour each, in which you try to find the smallest solution to a given scramble and write it down on a piece of paper.

The first solve was my first FMC solve in over a month so I messed up and got a 51, the second one went much better and I got a 38 with a skip of the last step.

In the third one, I wrote it correctly on my rough sheet but forgot a move on the actual solution sheet, I could have gotten a 36 move solution and a 41.66 mean of 3 and would have been 3rd in Delhi, had that not been a DNF.

Now onto my goals for 2018, first of all, I’m hoping to get Skewb National Record average.

I’m also trying to get top 10 in India for Megaminx and go to Asian Championships 2018 and hopefully even get Top 3 in Skewb. 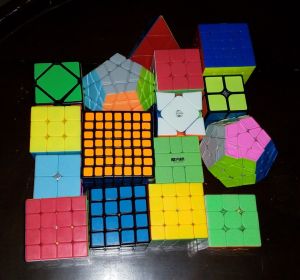