Just last week, My mom informed me about yet another special event for kids, this time it was coding. FYI, software and technology is what I want to make my career out of, so naturally I was interested. 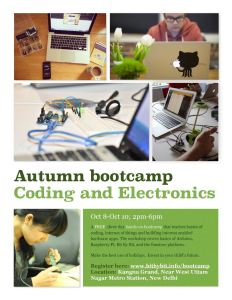 So on 8th Oct, the first day of the session, I left the house 45 minutes before it started, even though the location was around 10 Kms away, still I got late for it. (Thanks Delhi Jams!)

In haste I forgot to bring my laptop for the session which was an integral part of it.

Thankfully, they had a spare laptop which was not being used by anyone at the time, so I was able to use it.

The one hosting the session was Dr. Gaurav Gandhi, who is a friend of my dad too, he greeted me and I took a seat among the 15 children present there.

First we were introduced to “The Internet of Things” which means anything that is electronic and has the power to remotely talk to anything. We were then told to open a website which had many apps we could deploy with different types of microprocessors, including Raspberry Pi, Intel among various others. We had to use Raspberry Pi. I made a ‘Clap Switch’ which already had a code programmed so that whenever the decibel rate passes over 50% of its maximum rate, a LED would flash. Then we had a small break and after that we were free to play around with Raspberry Pi and clear our doubts.
We were also told to log on to code.org to play their Hour Of code, in which we have to try and play 20 levels of Angry Birdsand Plants vs.Zombies using coding. I completed it the fastest.

It was definitely fun, especially for me, and a Great Learning experience, mostly due to Dr. Gaurav Gandhi and his knowledge in this field.