.m. and there were only a few children, gradually more children came and we boarded the buses by noon.

We spent our time by watching movies on a friend’s iPod as phones weren’t allowed.

Here’s why phones weren’t allowed, in the last trip, some people from the other tents started banging on our door

and as we were warned that there might be hyenas outside, we were naturally scared, add to it that the time was 4 in the morning. A child in our tent called his mother out of fear and his mother called principal ma’am and she in turn called the teacher-in-charges, we all got a hefty scolding for a mistake we didn’t even commit, to avoid scenes like this, no device with a SIM slot was allowed. 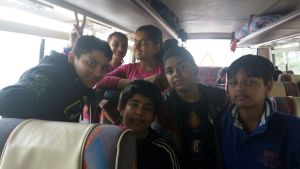 We reached Gurgaon in an hour and in another 1 ½ hours, we reached a mall in Bhiwadi, where we were supposed to halt to eat, we were to stay within Haldiram’s only, but the child who called up his mother(again him) was told off 4 times but still went to Domino’s. Me and my 3 classmates all bought something and we shared, I bought grilled sandwiches, two of them bought Pav-Bhaji and one bought Cholle-Bhature. It was a great lunch with tons of variety.

We left from there in about 30 minutes, Here’s the weirdest thing that happened to us, the iPod had 25% battery when we kept it inside the bag, but when we took it out, it was almost fully charged, that might be because it has been used for so long, everything starts glitching(It has been in use since ATLEAST 2006).

Then we halted for 5 minutes as we were over a ‘phatak’ or railway track on a road and a train was passing which looked like it was over 1 km long.

After some time we could see the hills, and after that the journey was not very eventful, the last 1 km to the Astroport was seriously bumpy. We finally reached there at 6:30 p.m.

At the entrance, there were some people dressed

in folk costumes and playing Rajasthani music on a harmonium. We all had been awaiting the result of the US presidential elections, when we came to know that Donald Trump won, most of us were sad, because he is a serious racist, but everyone deserves a chance. We went into our tents, which as before had 8 queen sized beds and 2 ACs. We changed into our woollens and went to the dining hall for snacks, this time the coffee was good, actually great(last time, the coffee was so strong even 10 spoons of sugar didn’t work on it, trust me, we seriously did it).

The cake was as hard as a rock, though the Pakoras and sandwiches were good.

We went back to our tents and the three male teachers, came to our tent because no other tents were empty, they unpacked their stuff and we all went outside with our Planispheres and torches which had red cellophane sheet on them.

The planisphere is an instrument where we can set the time and date we want to see the sky for and it would show how the sky would look at that time and date. We were told about the basic constellation and star, Cassiopeia and Polaris, the pole star.

We had red cellophane sheet on our torches because red gives out the least light and it would help us to see the sky clearly with being able to move around and see other humans on the Earth. We tried to find many famous stars by finding them on the planisphere for that time and pointing at them in the sky. Then it was dinner time, there were

The less said about the noodles and paneer bhurji, the better.

We went back to our tents to freshen up, we had to return to the dining hall for understanding what are Deep sky objects. This time we took our astronomer’s log book and Messier objects book too.

There are three kinds of DSOs(Deep Sky Objects)

These further have their own categories. We then went outside to find out different Messier objects that are in the constellations that could be seen from 12 30 a

.m. to 2 a.m. and had a magnitude of less than 6 because, the lesser the magnitude the brighter it would be.

We also had to sketch them in negative.

It was really cold outside and considering I only had a half-sleeve T-shirt on with a light leather jacket, I could easily have fever from being there.

We were then sent back to our tents to sleep, we changed into night suit and chatted for a while before going to sleep.

We woke up at 5 the next morning and freshened up to go to the dining hall for breakfast. There were Dal ke pakore, which were not very good, Poha which was fine, and Poori-Subzi which was manageable.

We then had a group photo and left for our buses, we got the last seat, for extra comfort as the seats were all conjoined without any holes or armrests in between, but immediately regretted it due to that bumpy stretch. We went forward to the middle of the bus so we didn’t feel as nauseous and pukey. We slept soon afterwards. Me and my best friend both slept and woke up at the exact same, as told to us by the other 2 classmates. We stopped at the same restaurant we stopped at the last trip, Rao Vaishno Dhaba, we all bought an Ice cream each, because as cold as it gets, no one can reject Ice Cream (in other words, we all had only 80 rupees combined, so that was all we could buy).

We sent the rest of our time by playing Super Mario on a borrowed handheld console from another friend.

We reached our school in 2 hours from there. It was again a great trip and we learnt many new things about astronomy.